A father doesn’t love his children intermittently or based on their performance…but …it’s a kind of love that’s 100% unconditional and goes on without an end.

At the birth of my last daughter, she was given a 50:50 chance to live. She weighed in at just 1.3 kgs at 28 weeks and remained in an incubator for what looked like days unending…since she could not breathe on her own.

Her dad went to the hospital at 5.00 a.m. every single morning before going to work. He held her tiny hands through the window of the incubator for one full hour. The doctors and nurses who were taking notes of the interaction between baby and father – said out loud …

‘there is no better and more effective medicine than a loving touch of a human hand.’

My daughter had corrective spinal surgery for Scoliosis at age 14 . Once again her dad held her hands for one hour as they prepped her before taking her away into the operating theatre. The surgery lasted for just over nine (9) long hours but her dad stood watched in the waiting room.

There’s no greater blessing than growing up with a father’s love.

On the third (3rd) day he held her hands as she began her walking therapy after surgery. He carefully walked with her up and down the hospital corridor for days unending as exercise was part of the recovery process.

He was her first hero and her guardian angel.

My daughter suffered from periodic Dystonia. Many nights he would hold her hands and walk the hallways of our home in the wee hours of the morning just for her to get some sort of relief. He will not go back to bed until she was able to go back to sleep.

A father is one whose children run into his arms at anytime.

He was the first influential man in her life and did an excellent job at it.

On March 21, 2015 her dad held her hands once again on her big day where he gave her away to her future husband. He secretly prayed in his heart that her husband would preserve the bond of love and the relationship she held with her father. A father’s love protects and empowers his daughter.

He set expectations on how a man should treat a lady, and taught her she should never settle for anything less.

When my daughter was having her first baby, he held her hands once again for several hours day and night at the hospital. She squeezed his hands as the contractions became more intense while her husband held on to the other hand.

The father’s daughter love flowed like a never ending river again – this time indirectly flowing on to the next generation.

As her father had loved her …so he now continues to love her little one. The love continues on ….

This father has undoubtedly inscribed a picture of my daughter’s hands in the palm of his hands and they are continually before him day and night.

Each day fathers make deposits into the memory banks of their children. 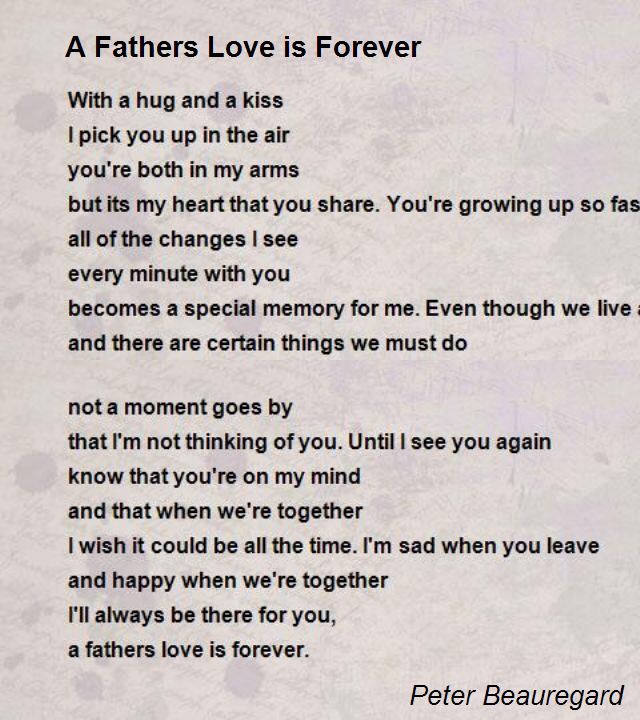 13 thoughts on “A Father’s Love is Timeless ”